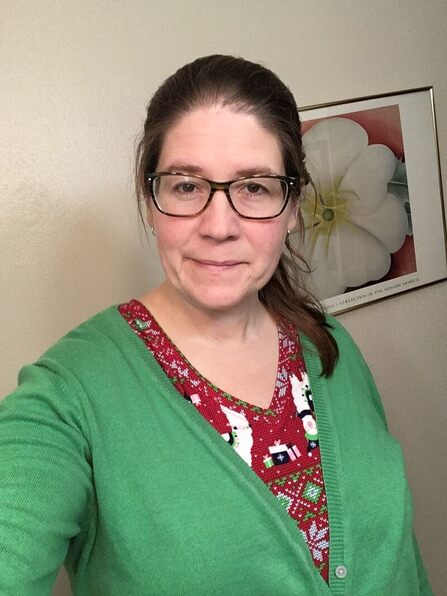 The Dorothy Donnelly Service Award is presented annually to USMS registered individuals whose volunteer service has contributed to the growth, improvement, or success of U.S. Masters Swimming locally, regionally, and/or nationally.  As a recipient of the 2021 Dorothy Donnelly Service Award, South Dakota's own Jenny Hodges becomes the first from our state to be recognized with such an honor.  Below is the text of her nomination form.  Congratulations, Jenny, and thanks for all you do!

Jenny Hodges grew up swimming in lakes and pools throughout South Dakota as a club swimmer for the Pierre Swim Team.  Her first involvement in U.S. Masters Swimming began when she worked in Sioux Falls in the late 90’s and began connecting with other adult swimmers there for shared workouts.  When she moved back home to Pierre, she sought to bring this same type of camaraderie and connection to her hometown pool, organizing a workout group of adult swimmers in January of 2007.  At the Oahe YMCA in Pierre, Jenny taught adult swim lessons and held lap swimming clinics in addition to founding the Masters group in Pierre.  She became a Level 1 & 2 USMS Certified Coach in 2016.

Several dual-sanctioned meets were held in Pierre, SD from 2008-2011.  Jenny was involved in those events and was present for the first annual meeting of the South Dakota LMSC in 2008.  Jenny and Edie Mueller from Sioux Falls were responsible for organizing the first South Dakota Masters State Swim Meet in 2012, in advance of the Summer Nationals in Omaha.  The first state meet took place in Pierre with Jenny as the meet director.  Ever since, the South Dakota Masters State Swim Meet has been held annually (with the exception of 2020).  Jenny has served as the meet director for seven out of nine state meet championships.  No compensation has been received for these efforts, nor in any of the activities mentioned elsewhere in this nomination form, excepting private swim lessons.

Jenny’s true swimming love is open water.  Lake Oahe in Pierre serves as her “happy place.”  In 2013, Jenny revived a swim across the Oahe Dam with an unsanctioned, unofficial swim.  About 12 participants took on the challenge, each with a personal escort.  Jenny brought the first official, sanctioned event to Pierre in 2014, and served as the event director.  “There was a lot of paperwork and red tape to wade through,” Jenny reminisces.  “Safety plans, permits, boats, jet skis, kayaks, EMTs, lifeguards, volunteers, and finding sponsors were just a few of the challenges.  My family and I are extremely proud of our ongoing work on this event.”

In 2015, Jenny was the first delegate from South Dakota to attend the U.S. Masters Swimming National Convention and Leadership Summit. She has attended convention ever since, making many friends and connections within the volunteers and leaders of USMS.  Jenny has grown her national involvement to serve as a member of the Open Water National Committee and Long Distance Committee, beginning her work in 2016 and 2020, respectively.